As you may have guessed things worked out for me and my life indeed is a miracle. The final radiation treatment was Christmas Eve 11 years ago today. It is wonderfully symbolic to think I completed my medical salvation on the day before celebrating the birth of the savior of my soul, heart and mind.

I would like to say I am now fully cancer free but the reality is that I do not think I will ever really be free.

Years ago when I going though all the treatments I would often I fall to my knees and ask God “why me?” Now years later I find myself asking the same question but in a different way.

“Why me Lord? Why was I healed when there are so many others out there hurting? What lesson(s) do you have for me? What am I to do with this gift?”

The reality if life is that we all should be asking ourselves these questions everyday. Any life we have is a gift and it should be treasured and shared in a positive way with others. The Bible says, “life is no longer than …
Post a Comment
Read more
December 23, 2009
Note: On 12/24 it will be 11 years since I completed my final cancer treatment. This week I am writing reflectively a bit about my experience.

My chemo treatments were an all day affair at the doctor’s office in his treatment room. Hopefully you have never had to visit one of these rooms. Mine was filled with large recliners set side by side and I was typically by many years the youngest person receiving a treatment. The type of chemo I received was different from the other folks in that I got it all in one long day and I did not lose my hair. The in office treatment was followed by immunotherapy through self administered shots in the evening. I will spare the details only to say the reaction to the interferon was far worse than the chemotherapy.

The miracle here was that the therapy began to shrink the tumors faster and to a smaller size than the Dr’s had believed were possible. Suddenly the prospect of having the tumors surgically removed became an unexpected reality. In this second …
Post a Comment
Read more
December 22, 2009
Note: On 12/24 it will be 11 years since I completed my final cancer treatment. This week I am writing reflectively a bit about my experience.

The early tests and conversations with the medical team were not encouraging. I had five tumors all in my lymph nodes with three under my arm and two near my neck. It is bad to have tumors in two places and so far from the original mole as this meant the cancer had metastasized. Quickly the doctors set out a plan for me that first included surgery to be followed chemotherapy, immunotherapy, surgery again if possible and finally radiation.

My cancer was declared Stage IV. This is not good news for any cancer and especially with Melanoma. The best five year survival rate I could find on the Internet for a stage IV patient was 19% with most sites showing an even smaller % chance to live. For hours I would just stare at my computer screen and read over and over statements like this one:

My Journey through cancer.. 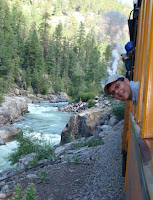 Note: 12/24 is the 11th anniversary of my final cancer treatment.

I will never forget that morning. I woke up just like any other day and started my normal routine. Little did I know that my life was about to change forever. I was in the shower enjoying a steamy start to another exciting day. Life was good. New job, new house, wonderful wife and a beautiful nine month old son peacefully sleeping in his room. At 31 years old, the world of possibilities was finally opening a door for me.

Then as I washed under my arm I felt it—I pressed hard to confirm it was there and when doing so found a second one. I immediately and without a shadow of doubt in my mind knew what I had discovered--Cancer

I was no stranger to the possibility. It was five years earlier when a mole had been removed from my back and declared melanoma. However, after such a long length of time I had become confident I would not have to deal with this again. Suddenly, and without any forewarning that confidence was gone.