Showing posts from January, 2011
Show all

Bad dads piss me off 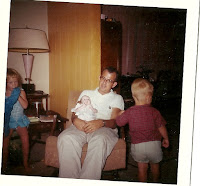 There I said it.

My father died when I was very young shortly after my mother and father had divorced. As hard as I have tried, I have no memories of my father and I do not recall my mother ever sharing stories with me as a child about the kind of man he was.

Growing up a fatherless boy in a single parent household had a tremendous impact on my youth. It did not help that I was overweight, awkward and very shy. Not having a father became a focus to everything I perceived as wrong in my life. I just knew if I had a dad around he would be teaching me everything I wanted to be and was not. I would know how to be athletic, fix things, be thin, talk to girls, be smart, make friends, and more. Eventually when I was in 8th grade my mother remarried but unfortunately the man that became my stepfather and I never connected.
Fast forward to August 19th 1997. On this day I became a father. I will admit that I was terrified about being a dad to a son. What kind of dad would I be given that I h…
1 comment
Read more

I have a confession. I love Mondays.


What? Yes I know most people hate Mondays and comments putting down the day are quite common. Of course there are those “back to the salt mine” and other references to the drudgery of another work week that we hear often on this day.

Here’s the deal. I see every Monday as a little Jan 1st. It is an opportunity to start fresh and step into week of new goals and promises. The mistakes and missteps of last week are gone and my life is once again a blank page. What will I accomplish this week? What meetings to I need to plan? What performance at work do I need to impact? How many miles does my training schedule say I need to run? What is my nutrition plan to be healthy? What steps can I take this week to honor God?

These are just a few questions I find myself asking every Monday morning.

Face it. The majority of our lives take place during t…
1 comment
Read more 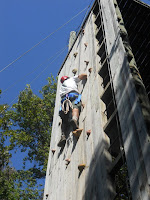 
This is one of the most powerful statements I have ever heard and I posted it up as a theme as I wrote my 2011 goals.

I think one of the greatest dangers in life is success as it can lead to complacency. You reach that weight loss goal, stop eating right and soon the weight starts to creep back on. You finish the marathon and the post run workout break soon becomes months of inactivity. You finally get that job you dreamed and worked so hard for and then stop learning and growing. I have seen this in my own life many times.

Good is indeed the enemy of great.

I am planning to get radical in 2011. I do not want to be comfortable and content. I want and plan to seek the pain of challenge and of risk.

What about you?
If you have not taken a deep personal assessment of what you are going to do differently do it now and post it somewhere that will drive you forward. Step out this year and stop doi…
Post a Comment
Read more

Getting healthy thanks to Android and my HTC EVO from Sprint 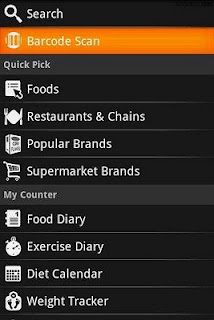 Like many of you I am using the New Year as an opportunity to refocus on my health and shed the pounds I picked up thanks to all the yummy holiday food over the previous two months. This year I have a new arsenal of weapons in my war against girth thanks to my wonderful HTC EVO and the Android market.


The key to losing weight I have found over the years is not to diet but instead focus on healthy eating habits and to make in an all in family lifestyle choice. Diets simply do not work because they are temporary and mentally indicate you are “on a program”. Programs have a beginning and an ending vs. a lifestyle which is simply ongoing.

Losing weight through a life style change then becomes easy and simple. Keys for me have been:

• No snacks after 8PM

• Focus on fresh fruits and vegetables

• Lower intensity cardio over a longer period of time